It’s easy to make blunders on social media, and there’s very little you can do to stop the momentum once the bad press starts. Fortunately, one brand’s pain is another brand’s gain. Let’s take a look at some of this year’s biggest social media fails and what you can do to avoid similar situations.

[ctt template=”4″ link=”22qDy” via=”no” nofollow=”yes”]Know your audience well before posting on #socialmedia, or the backlash can go more viral than your posts. [/ctt]

Companies need to put their best foot forward when posting on social media, but that’s especially important when it’s a reflection of their core brand or service. If a butcher misspells “Angus,” it’s not really a big deal. But if that same butcher calls a New York strip steak a filet mignon, it could turn ugly really quickly. That’s what happened for the U.S. Department of Education earlier this year.

Secretary of Education Betsy DeVos was already struggling with her public image when the U.S. Department of Education that she spearheads made this tweet in honor of Black History Month:

The typo sparked quite a bit of attention: 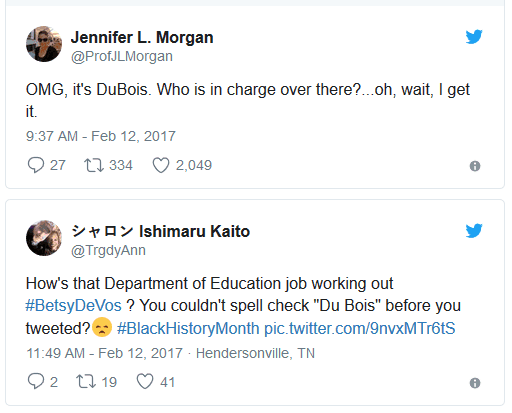 What we can learn: Do your homework. No matter what you’re posting — but especially if it’s directly related to your business — get it right. There are no backsies when it comes to social media. If you can’t get your industry bits and baubles correct, consumers are going to lose faith in your brand.

Related: Social Media Stars – Love’em and Learn From Them

Uber and the Immigration Debacle

In response to President Trump’s immigration ban, taxi drivers decided to stop service to New York’s JFK International airport and demonstrators gathered in protest. Once it was over and drivers returned to work. Uber opted to capitalize on the development by tweeting this:

Consumers — including many celebs — saw this as Uber trying to profit from the controversy (although Uber claimed it was trying to do the opposite), and they weren’t having it. The #DeleteUber movement was born, and the Twittersphere was filled with screenshots of users deleting the Uber app and making their contempt known.

In fact, within a few days after the original tweet, more than 200,000 had deleted the app and pledged their loyalty to Uber’s top competitor, Lyft. I think Lyft was the genius in this whole scenario. It was also trying to capitalize on the situation but did so in a way that was meaningful to its audience. It publicly pledged a $1 million donation to the ACLU to help it defend the Constitution.

What we can learn: When it comes to politics and cultural issues — tread carefully. You may have the best intentions and truly mean to show empathy, but your followers may not see eye to eye with you. When making important statements about current events, don’t do it in a vacuum. Get several pairs of eyes on what you plan to post or risk offending your audience.

[ctt template=”4″ link=”qcUre” via=”no” nofollow=”yes”]#Socialmedia done right can get great exposure for your brand. Done wrong, and you’re in for a PR nightmare. [/ctt]

Asleep at the Wheel at Walkers

Popular UK snack brand Walkers learned a lesson in user-generated content with its recent #WalkersWave campaign. The company invited consumers to snap selfies of themselves with the Walkers brand. The photos were then turned into short videos starring former soccer player Gary Lineker.

Unfortunately, it doesn’t seem as though anyone at Walkers was vetting the images, and Lineker was seen across social media holding up photos of and interacting with the likes of serial killers, dictators and well-known sex offenders. 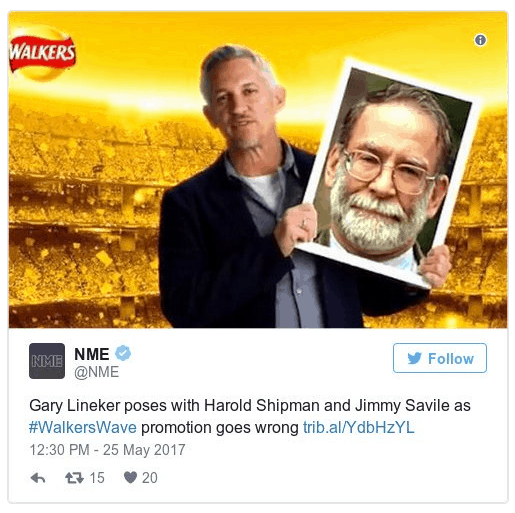 Though a Walkers representative responded immediately, the damage was already done. Three months later, and the brand’s campaign is still being actively mocked across social media.

What we can learn: Never put your social media on autopilot. Whether you let your audience generate content for you or you have a leading industry expert in charge, your social media channels need constant oversight.

Cruz was quick to lay the blame, stating that a member of his staff had inadvertently made the error.

What we can learn: If you constantly switch back and forth between your personal Twitter account and that of your brand, stop. It’s not a question of if this could happen to you; it’s a matter of when. To prevent this from happening, sign up for a service such as Hootsuite that posts for you, and only register your brand’s Twitter address. Trust me – it will save you a lot of pain and embarrassment down the road.

As Director of QA/Enterprise Production, Lisa is in the trenches of content marketing everyday. She manages large-scale projects for some of the web's largest etailers, ensuring they get high-quality results on time.

How My Dog Helps Me Convert Leads into Sales – A …

Today's biggest stars aren't necessarily Oscar winners or even literal rock stars. Instead, a new variety of home-grown stars are...